Our history began in July 1956, when the Portuguese immigrant Julio Simões founded Transportadora Julio Simões Ltda. (currently JSL), when purchasing his first truck and starting to transport produce from Mogi das Cruzes to São Paulo and Rio de Janeiro. In the same year, he started to provide transportation services for the pulp and paper industry. In 1970, the company made its first acquisition, Transcofer, a company that was three times bigger, and in 1972, JSL already had a fleet of 42 trucks. With a lot of work and dedication, trust from financial institutions, and people committed to focusing on delighting the customer, the company had a great growth cycle throughout the 1970s

In 1981, at the age of 14, Fernando Antônio Simões, the youngest son of Mr. Julio, started working at JSL, went through several areas and, in 1986, became operational director. Two years later he took over the company’s commercial area. At the end of the 1980s, the Group started diversifying and going to act in the leasing of light vehicles and chartering to transport employees. Having credibility, delivery history, and focus on customer needs, JSL was able to take advantage of the great cycle of outsourcing in the industries.

In the early 1990s, Fernando already shared the company’s management with his father and continued to diversify the business. This movement aimed to add even more value to customers, increasing customer loyalty and differentiation related to competitors, and reducing customer concentration and dependence on activities and segments. Over the decade, the Group started to operate in the sale of light vehicles, Fleet Management and Outsourcing (GTF, as its acronym in Portuguese for Gestão de Terceirização de Frotas) for light vehicles, leasing of heavy assets, and urban mobility.

After the turn of the millennium, the company further expanded its operation area and implemented services such as forestry operations and handling within its customers’ industrial units. All of these movements led JSL, already in 2001, to the leadership in its segment’s ranking, a position in which it has remained ever sinc . In 2006, the Julio Simões Institute was created, aiming at concentrating and improving all the social actions that have always been carried out by the founder and his wife in favor of the communities where we operate. In 2009, according to the Group’s strategic planning, all operations with the public sector were consolidated at CS Brasil, a company in which the entire team with specific technical capacity for its segment was concentrated, and with different governance and transparency practices

In 2010, as another step to strengthen the company’s governance, solidity, and differentiation, the IPO was launched in the New Market segment, the highest level of corporate governance at B3. This important step was part of the company’s strategic planning as a way to expand access to capital to support the business development cycle, contribute to the company’s perpetuity, and offer more security to customers who entrust the company to carry out strategic activities

In 2011, JSL acquired Rodoviário Schio, the largest food transport and storage company in controlled temperatures in the country, expanding its logistics services platform. In 2013, JSL Leasing was created with the objective of supporting the Group’s sales and customer loyalty process In early 2014, the acquisition of Movida, which had a fleet of 2,400 vehicles and 29 stores, was completed. Movida centralized the Fleet Management and Outsourcing (GTF, as its acronym in Portuguese for Gestão e Terceirização de Frota ) operations of light vehicles that were carried out by JSL and, with our DNA of serving, pioneered several innovations focusing on customer needs, such as the offer of imported cars, a wide range of models, and the use of technology to improve the customer experience, contributing to the transformation of the car rental market in Brazil. In 2015, following the established in the strategic plan, the Group created Vamos, which started to consolidate the entire leasing operation of heavy assets that had already been carried out by JSL since the 1990s, in addition to the network of Volkswagen/MAN truck and bus dealerships, and the used vehicle network

In early 2017, Movida’s IPO was carried out, strengthening its capital structure for the company’s development. In the same year, Vamos acquired Grupo Borgato, a company that leases and sells heavy machinery and equipment for the agricultural sector.  In 2019, JSL Leasing was renamed BBC Leasing, and BBC Digital was created, a digital financial services platform focused on the group’s ecosystem, seeking to better serve and retain its customers

Between 2014 and 2019, the Group posted a 77% growth in consolidated revenue to more than R$10.7 billion, reaching, in 2019, a record Net Income of R$319 million as a result of the new contracts and investments made, and the organizational transformation with greater autonomy and independence for the Group’s companies. In the same period, the Brazilian economy dropped 3% of GDP, showing the resilience of the Group’s businesses

In July 2020, the holding activity, which until then was carried out by JSL itself, started to be carried out by SIMPAR, which consolidated the shareholdings and the corporate team to direct, monitor, and control the execution of business plans of subsidiaries, develop new businesses and operating segments, and ensure the alignment of values, culture, and management model. 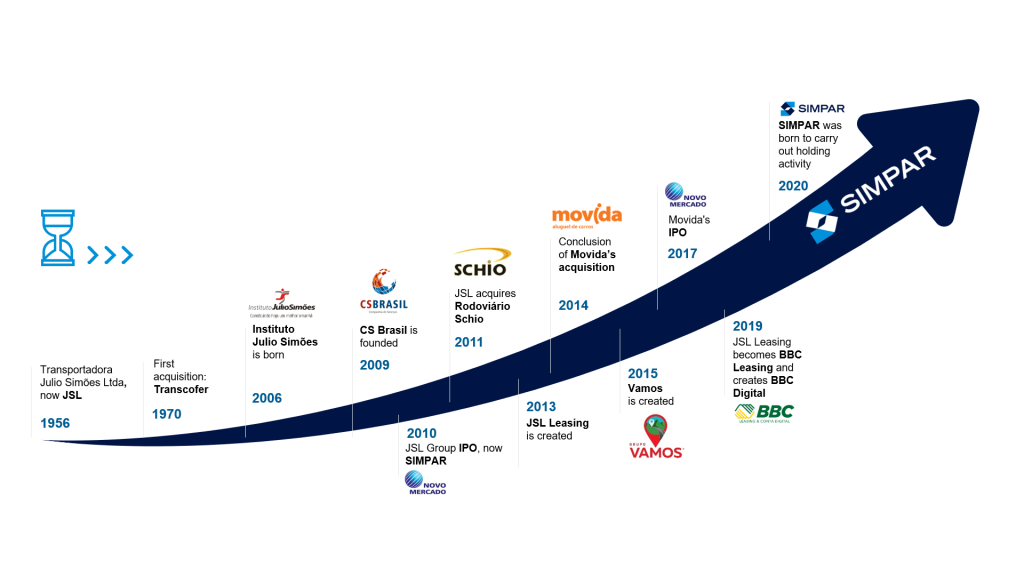